Yesterday I went to the ER with nausea, vomiting and abdominal pain that was wrapping around my left side towards my back. They wanted to do a CT scan with oral and IV contrast, but I threw up the first bottle of contrast right after I finished drinking it. They decided not to make me drink the second bottle and just used the IV contrast.

According to the CT report, "There is new moderate left hydronephrosis and hydroureter with the left ureter traced to the midportion. Likely obstructed beyond this point from peritoneal metastases. Otherwise unremarkable bilateral kidneys and right ureter."

They gave me ciprofloxacin and told me to follow up with my gynecological oncologist. I'm going to see him on Tuesday and he wants me to see a urologist.
Posted at 7:01 PM No comments:

I was hospitalized from March 21 to March 31. I had an NG tube and was only allowed ice chips for a couple of days. They started unhooking the NG tube and let me eat after about the 4th day. They were talking about removing the tube and letting me go home when I threw up again. Apparently, I can't handle melons. They put me back on suction for the NG tube and clear fluids. They slowly advanced my diet to regular food. Once I could eat regular food, they took out the NG tube and let me go home. I was told to eat low fiber for a month or two and that I might have problems in the future.
Posted at 8:19 AM No comments:

I finished my IV antibiotics the other day and realized I hadn't posted any information about it.

My port was accessed at infusion and the needle was left in for the week then they changed the needle for the second week.

Everyday, I flushed the port with saline then attached the IV grenade. It had to run for 27 minutes. When it was done, I had to flush my port with saline again and then flush it with heparin before attaching an orange antibacterial cap.


Here's a picture of the IV grenade 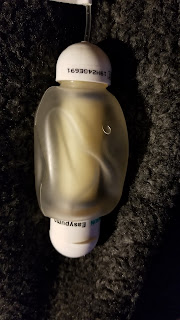 The plan was to have a needle aspiration on Tuesday 3/3 at 1 pm. That didn't happen.

Tuesday morning, I woke around 4:30 am and realized something was ... well, off. My thought was that the freezer pack had leaked, but then I remembered putting it in the freezer. Dammit, my ostomy must've leaked! I turned on the light and pulled back the covers to see how much of a mess I had. Imagine my horror when I see bloody, smelly pus all over me and the bed including the pillow! The fluid build up had decided self aspirate at the site of the old ileostomy. I grabbed the towel that I  had used between the ice pack and my skin so I wouldn't ooze everywhere, rinsed off, grabbed a dry towel(first one was pretty saturated), threw on some sweats, grabbed another clean towel, and called 911. In the ambulance, they gave a 5"x9" abdominal pad to use instead of the towel. By the time we got to the hospital about 10 miles away, THAT was soaked too. I got to the hospital about 5:30 am.

I spent the day in the ER getting IV antibiotics, CT scan, blood work, would cultures and I soaked 4 more pads before being admitted and getting a room at 6:45 pm. Wednesday, the wound care nurse came to see me. She looked at it, gently touched it, and took measurements. There are 4 holes on my waist. They are spread over an area that's about 1" x5". Three of the holes are large enough to stick a Q-tip into (I know because she did when she was measuring the depth). The fourth one is smaller, maybe the size of the Q-tip shaft. Thankfully, she didn't try to insert anything into it. She put a dressing on it and gave me care instructions for when I got home. The infectious disease doctor also came to see me Wednesday evening. He asked me all sorts of questions about happened, my history of MRSA and my antibiotic allergies. He mentioned take home IV antibiotics, describing a small device "about the size and shape of a grenade" .  In the ER, they had been giving me clindamycin. Wednesday morning, my gynecological oncologist had me switched to levofloxacin. Wednesday evening, the infectious disease doctor had me switched to vancomycin. Thursday, they added mupirocin ointment for the MRSA in my nose. The infectious disease doctor came back Thursday afternoon to tell me that the wound was negative for MRSA but positive for skin bacteria. He switched me to daptomycin and had the first dose given to me at the hospital to make sure I wasn't allergic. I was discharged Thursday evening.

Friday, my IV supplies were delivered and a nurse came out to teach me how to use everything. I'll write a separate entry about the IV system later.  On Monday, a wound care nurse is coming out to check on me.
Posted at 9:33 PM No comments:

Apparently it's not a hernia but a collection of fluid in my abdomen. I have Interventional Radiology on Tuesday for a needle aspiration. I also have chemo tomorrow and a urologist on Monday. There's some swelling around one of my kidneys.
Posted at 4:10 PM No comments:

So the abdominal pain, nausea, & vomiting came back yesterday morning. After I threw up a couple of times and the pain worsening, I called 911. Once in the ER, they gave me morphine, phenergan(anti-nausea) & IV fluids. They decided to do a CT with oral & IV contrast. I had to drink 2 bottles of that nastiness. The first bottle I had to drink in 15 minutes, the second I was given an hour. I almost threw up the first sip of the first bottle. The CT showed that I have a small right lower quadrant ventral hernia containing fluid. I have an appointment with my gynecological oncologist/surgeon on Tuesday, so I'll find out more then,
Posted at 9:46 AM No comments:

On Saturday, 2/8/20, I had my mom take me to the ER with severe abdominal pain, nausea & vomiting. They gave me morphine for the pain, zofran for the nausea & IV fluids. They sent me for a CT with oral & IV contrast to see if the blockage had come back(it hadn't). After about 8 hours, they sent me home EVEN though I was still vomiting.

On Sunday, 2/9/20, I woke with same symptoms. Even water was making me throw up, so I called an ambulance to take me to the ER. This time they decided to admit me to the hospital for observation. I was on clear fluids for the first night. By lunch on Monday, they decided to let me try a regular diet. It's been staying down, but I can't eat very much at a time. My gynecological oncologist said I can probably go home tomorrow(Wednesday) & to try eating smaller more frequent meals.
Posted at 2:28 PM No comments:

I spent today in the ER with severe abdominal pain and nausea. I was worried that the blockage was back but the CT was clear. They gave me IV fluids and sent me home with Zofran for the nausea.
Posted at 7:12 PM No comments:

Home from the hospital

I was discharged from the hospital yesterday. I'm supposed to take it easy for a while and follow up with my gynecological oncologist in about 2 weeks. Hopefully I never have to go through this again, but because of the way the tumors are I might. #CancerSucks
Posted at 12:36 PM No comments:

They unhooked my NG tube from the suction this morning and are going to leave for 8 hours to see if I have any problems with nausea. If all goes well, the tube comes out and they'll start me on clear fluids.
Posted at 12:16 PM No comments:
Older Posts Home
Subscribe to: Posts (Atom)